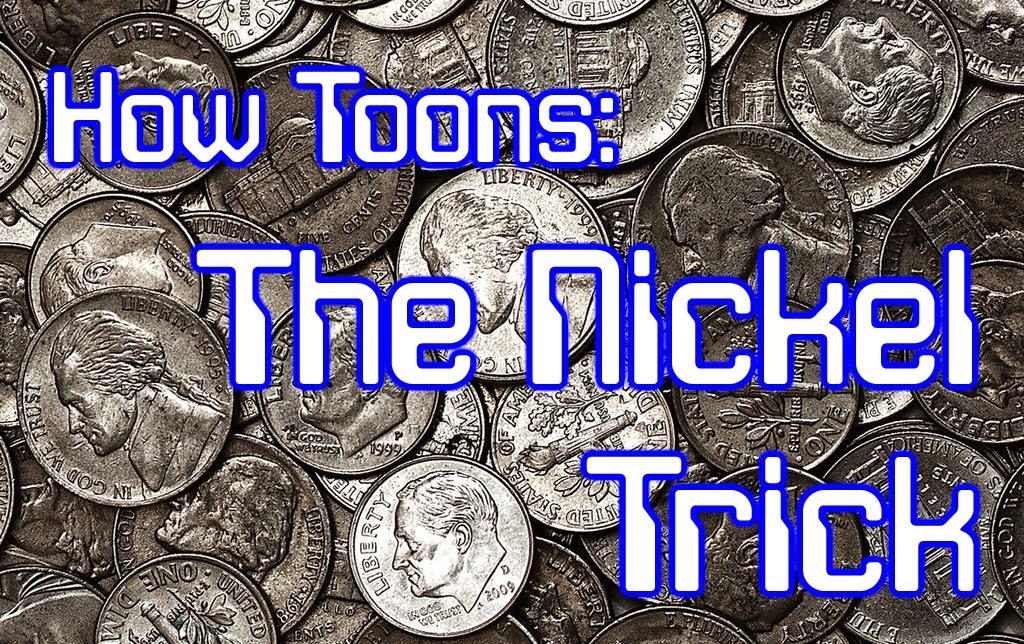 During Episode 10 of All Wine Aside on The Trending Topics Network, the girls asked listeners to describe their "move" in reference to picking up girls or guys. Of course, in the interest of good radio - and because I was at work at the time - I made a simple submission in the form of "The Nickel Trick."

As a testimonial to the power of The Nickel Trick, when I mentioned the girls' original query, my wife, without prompting, responded with "The Nickel Trick. Helloooo." Need I say more?

Of course I do.

In truth, as powerful a tool as this "move" is, the internet has not been made aware of its secrets until this very post. Yet, to keep it mine in perpetuity would be the greatest of travesties. I may be "off the market" now but that doesn't mean The Nickel Trick should be, too.

What you are about to learn is, by one definition, magic. It plays on misdirection, using three things that women (should that be your "target audience") look for in a male: money, manly features and a sense of humor.

Like any magic trick, it can be performed nearly anywhere. I have personally used it in clubs, in the lobby of a family restaurant, at volleyball tournaments, weddings, college dormitory hallways and many other locations both public and private.

As you will find out, The Nickel Trick is composed of several distinct steps, 9 in this case. Each step is vital. Each step has a reason.

Do not question the method.

Step 1: Secure a nickel. In reality, it doesn't matter what coin you use. Initially, I chose a nickel because it was the first coin I tried the trick with. There are other benefits to using a nickel as well, such as its smooth edge and small-but-not-too-small size. Following that first attempt, which was, in principal, successful, I had my Lucky Nickel on me continuously for several years.

This is normal. Just go with it.

Step 2: Acquire a "mark." Obviously, at this point, my use of the word "mark" is a total play on magician speak. It's the person you aim to engage with The Nickel Trick. This step should need very little explanation, so I'll offer none.

Step 3: Approach your "mark." This step is always a little more easier said than done unless you're endowed with a healthy amount of self-confidence. Part of the greatness of The Nickel Trick is that that confidence in one's self isn't necessary if you have confidence in the system.

The key to a successful approach is being observant. You have to recognize whether or not there's a boyfriend in the area. You have to observe your mark's personality so that you can play off of it. And, last but not least, you have to assess the mark's friends and the dynamic of that group.

Pick out the leaders, the lieutenants and the girls who just feel lucky to be invited. Every group has this dynamic. Your job is to pick up on it.

Step 4: Introduce yourself. Again, this step is pretty self-explanatory. At the same time, it's not about you. Instead, you continue to observe. First and foremost, you want your mark's name, but you want to learn as much about their friends so that you can use your interest in them to garner interest in yourself.

This is the most basic of concepts, yet often neglected. If you show interest in the things - and people - that somebody is interested in, they're immediately more interested in you, even if only subconsciously.

But it's an important start.

Step 5: Introduce the trick. This is where the fun begins. People don't generally walk up to others and say "Hey, wanna see a trick?" Yet, when it happens people are naturally drawn to it. People just want to be entertained, even if for a few moments.

For this step, have the nickel out already for the "Ooohhh, it's so shiny" effect. It's hard to say no to somebody who's prepared. And it's just a plain old nickel.

Step 6: Allow your audience to examine the nickel. At this point, you're into the trick so it's important that your mark is as well. One thing magicians always do is allow their audience a moment of observation. It's every bit as important for the audience to be drawn into figuring your trick and, as a result, you out. At this point you've gained a bit of mystery or at least the element of curiosity.

Ensuring that you are able to pick up or place the nickel directly into your mark's hand is a key part of this process as well. Slight hand-to-hand contact actually reduces the creep factor when you don't do anything creepy, like lick their hands.....much.

Step 7: Flip that coin! At this point, you're actually nearing the end of the trick. And this step is so ridiculously simple that you may question it at this point.

While flipping the coin is the piece de resistance of this step, positioning yourself correctly is the single most important part. You should be standing at a distance that, if you and your mark were to reach for each other, you would end up 5-6 inches away from actually touching fingertips.

If you're lucky, the mark is seated. This makes for the ideal positioning for the two parties. It's not all over if she is standing, but The Nickel Trick is much more effectual if the targeted is seated.

The coin flip itself has absolutely no secret. You just flip it into the air and let it land.

Step 8: The Big Finish. As you read this, you have no doubt fallen into the exact same "trap" you have laid for your mark: you're wondering what the coin did. It doesn't matter what happened to the coin beyond the fact that gravity took over. It's misdirection and the key component of any magic trick.

The Big Finish is actually what you and your mark are doing. Like the reader earlier in this step, all focus is pulled in on that coin, so their eyes, and likely their head, follow it. In the meantime, you simply spin around, placing yourself between the mark and the fallen coin, bending over to pick the coin up, declaring "I guess it didn't work" in the process.

The end result is a group of people following your nickel when, instantaneously, your posterior ends up directly in their line of vision.

Step 9: Afterwards. After this happens, in what will seem like a whirlwind to them, you treat them exactly as you would an audience. Thank them for being good sports. Shake each "audience member's" hand, saving any meaningful eye contact and a slightly longer - if not softer - handshake for the one whose attentions you seek, mentioning each one by name.

Add whatever else you like to the conversation without coming across as too forward or needy, and simply walk away for now.

Why it works: Admittedly, I don't know the scientific or psychological reason behind why this seems to elicit such a positive response from people, but I'll take a crack at it:
Having the right "move" is necessary sometimes but not for the reasons one would believe. It's really all about confidence. If a person has confidence in their moves, it bleeds into a sense of self-confidence.