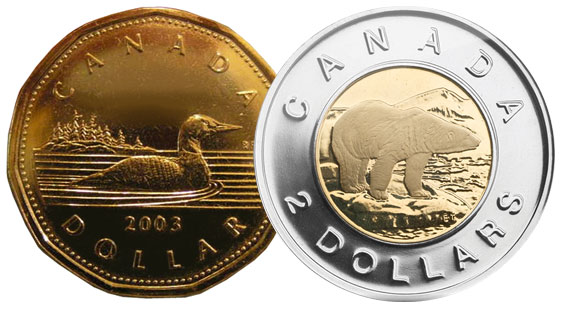 All throughout December, Toons is celebrating Canada Appreciation Month. Each day, we will share with you something that Canada has that is absolutely worthy of our appreciation.

Every nation - excepting those members of the European Union and a few others - has its own currency. In Canada, they have one very specific coin that we here at Toons could never ignore.

From the very beginning, Loonies have been a very important part of Toons lore. In the early days of Toons, our chat room was called the Loonie Bin. If you're reading this post or have ever listened to an episode of the Toons/Morning Toons/ToonsSports podcast, you are yourself a Loonie. Reading this makes you a Loonie.

The Canadian Loonie is as unique as a Toons Loonie.

Sure, it features an image of a common loon, a bird that can be found nearly anywhere in Canada. It's just a bird that looks a lot like a duck. That's not that special.

On the flip side of the coin, Queen Elizabeth II appears. This is not that big of a deal either. She's on various forms of currency in over 30 countries.

Even the shape of the Loonie is not especially unique. It's 11-sided configuration is also used in the Susan B Anthony dollar in the United States. Granted, Susan B Anthony's are not widely circulated, so it still feels a little special when you get one.

The Loonie was introduced in 1986 as a replacement for the paper dollar bill in Canada and officially began circulating the following year. Since then, it has since become the standard used, in terms of exchange rates, used by the international community.

The Loonie has had such an influence in the country that when Canada introduced a new two-dollar coin in 1996, Canadians immediately began calling it the "toonie," a mix between "two" and "loonie."

And surely you've heard of the "Lucky Loonie"? This came to be at the 2002 Salt Lake City Olympic Games when Dan Craig, an NHL ice making specialist, was brought in to supervise the construction of the ice hockey rink for the Games. He secretly placed a Canadian dime - which disappeared - and then a Loonie at the center ice dot as a target for referees to drop the puck at.

Only the Canadian men and women teams - which both ended up winning Gold at the Games - knew about it until Wayne Gretzky, Team Canada's executive director, revealed its existence after the Gold Medal was secured. Gretzky was given the coin after it was dug up and is presumed to still possess it.

Because of that "lucky loonie," The Royal Canadian Mint has released a commemorative Loonie every Olympic year since.